Creativity tests and quizzes can be bewildering. They can lead you down a false path, into believing that your creativity is sub par. Or even that you are not a creative person at all!

In this article, you’ll learn why no test of creativity can truly measure real creativity.

If you thought that creativity would be challenging to measure, you’d be right.
In a way, creativity research reminds me of the beautiful moment in the book ‘Zen and the Art of Motorcycle Maintenance: An Inquiry into Values by Robert Pirsig.

The father discusses the question of ‘quality’ with his son while they traverse America’s Northwest by motorbike. 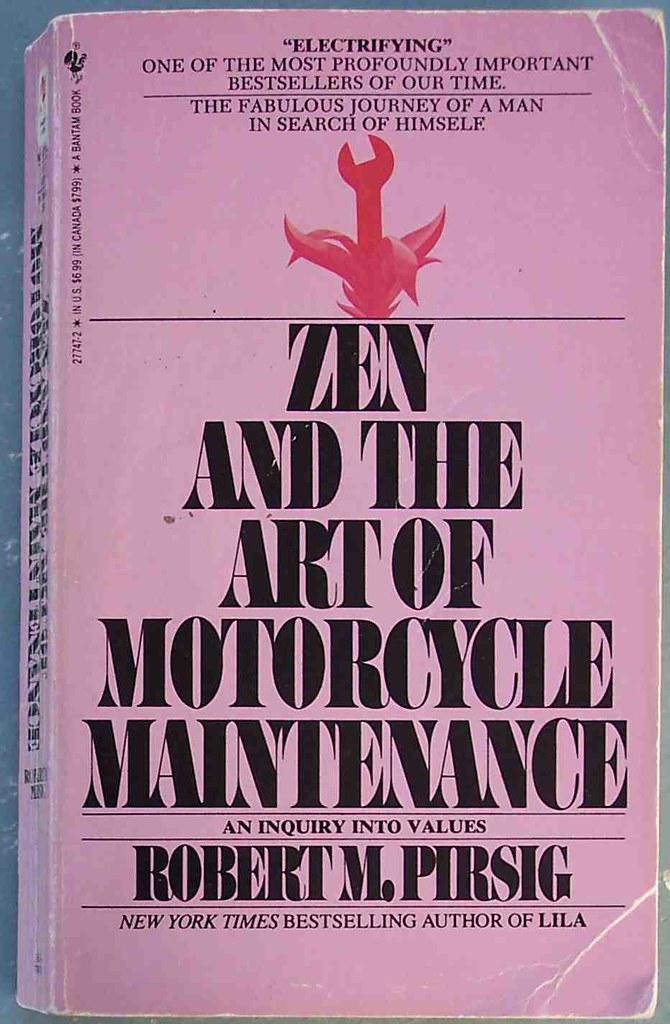 “zen and the art of motorcycle maintenance” by cdrummbks is licensed under CC BY 2.0

Creativity has an intangible nature. It’s hard to describe, but we recognize it when we see it.

Some people stand out in one area of activity. In contrast, others are polymaths – able the excel in many different activities. Including creative activities.

Therefore, it seems that tests that look at the number of creative achievements entirely miss an essential feature of human behavior.

The other issue is that some people – for a whole range of reasons – are less motivated to engage in creative activity than others. But this does not mean that they are inherently less creative!

Creativity is a process, not an event. The phases of creativity can extend over a very long time.

What Aspects of Creativity Do the Tests Try to Judge?

The main aspects of human creativity that creativity tests try to judge are divergent thinking (coming up with many ideas), originality, and flexibility.

The Types of Creativity Tests

Since the 1960s, if not earlier, neuroscientists and psychologists have been trying to devise various tests to measure creativity.

These fall into three broad categories:

The Torrance Test of Creative Thinking

One type of testing challenges the person being tested into coming up with creative responses. The most well-known of these is probably the Torrance tests.

This test, among other things, asks you to come up with alternative uses for mundane items like a brick or to describe possible uses for an old shirt.

The responses are then scored in terms of quantity and novelty. This is called ‘Unusual Uses.’ As with IQ testing, the tests are scored with a bell curve. The highest-scoring people are given a mark of creative genius.

Try writing out right now 30 uses for a brick?!

People who stand out for their creativity are very likely to have a high IQ. But the facets of creativity go beyond intelligence.

For example, the above psychology test looks not only at divergent thinking – the number of solutions you find – but also at the inventiveness, or novelty, of the answers you find.

When you think creatively, there is no single correct answer!

The rate at which someone can generate ideas is called fluency. The great thing about fluency is that as one idea lands, it sparks other associated ideas.

Generating many ideas far removed from the original – unlikely or ‘unique’ responses – would be a creativity indicator.

Such creativity tests have been used in just about every population you can imagine.

The point worth noting is that this kind of test indicates creative potential; the expression of creativity is something else.

The other type of creativity testing is based on the level of creative productivity in a given field. So, for example, an artist is scored by how many exhibitions, or artworks, he/she has created.

Or a writer might be scored on his/her publication record. Again, we get a bell curve.

This goes beyond the first kind of test above because it addresses creative – unusual – ideas into actual creative work. Creative ‘value’ is produced.

So when we talk about a ‘creative person, we usually mean someone who:

A. has creative ideas. Lots of them.
B. does something with those ideas. Generally taking the best of them into some form of creative expression.

Attaining (B) gets us into the territory of creative motivation. But I’ll address that later!

There is an extension of this type of creativity assessment that looks at standout creatives in their chosen fields.

For example, national-level medal winners and drills down into their traits, personal biographies, and workflows to find common patterns.

You may sometimes encounter the Creative Achievement Questionnaire, devised by Shelley Carson at Harvard University. Created in 2005, it has been updated to include Online Film, Design, Coding, etc.

As a documentary film director, fiction audiobook narrator, and writer, I have a particular interest in the above category!

Depending on the number of boxes you tick, you end up being scored between ‘No Creative Achievement’ to ‘Promethean.’

Despite the scientific rationale described in the original peer-reviewed paper, I find the questionnaire dubious. I believe that many creative people and creative professionals would agree with me.

It places a heavy emphasis on publication, awards, and training. I hope that some nascent creative types have not been discouraged by it!

The idea here is to see relationships between things that are remotely associated.
It looks for linking words. So, for example, you might say:

and look for the response ‘Light,’ or another term that connects to the three seed words.

Measurement – or assessment – has to be relevant to the field of activity in which an individual shines. It’s more about comparison with others, or other works, in the same genre – than some kind of absolute metric that fits all use cases.

You cannot easily compare Nina Simone with Bill Gates on some creativity scale and score each of them on some absolute metric. It doesn’t make sense, nor does it do justice to the respective abilities of each.

The comparison has to be made in the particular field of endeavor in which they operate.

Usually by people with sufficient expertise to know the range of talent and assess the degree of creative achievement!

Why Would We Even Care About Measuring Creativity?

The fact is that although creatives down the years have come up with all sorts of valuable ideas that turn into useful products, they rarely see the fruits of any given creative idea. Ideas that they originated. Implementation is valued more than ideation.

More often than not, businesses or entrepreneurs take creative ideas and turn them into an innovative product – which they then sell.

With the development of the Knowledge Economy, and the encroaching role of Artificial Intelligence in all areas of life, including the workplace, creative thinking will be at even more of a premium.

Behind every product, or launch, are thousands of ideas.

Therefore, companies seek to identify creative individuals, or those predisposed to creativity, within their workforces and new hires. In turn, they aim to amass the maximum number of good creative ideas.

However, there are choices for a creative person.

Suppose you have a good appreciation for your creative value, which in turn will engender creative confidence. In that case, you will be much better placed to be paid what you are worth!

Creative people can use creativity testing and assessments to their advantage!
Of course, suppose someone has creative drive AND an entrepreneurial side (and seeks to acquire and improve the necessary skills associated with both). In that case, they enter another stratum of success altogether.

Does a Creativity Test Give a Result Worth Having?

And should we measure creativity at all?

Whether creativity measures have any value very much depends on your perspective.

If you’re a company that wants to hire only the most creative people and derive the benefits of innovation, then the tests might have some use.

If you are a manager looking for managers who will bring in more customers or make your business grow, then there is no value here.

The tests measure what they set out to measure – and that’s the creative person in question.

Artists, musicians, and so forth are likely to be skeptical about the results of creativity tests. After all, tests are about measuring. It may be interesting to see how their performance on the tests has changed after some time, but the tests are hardly likely to change their views about themselves.

I wonder what the result would have been if Picasso or Miles Davis were subjected to creativity tests. What would have happened if they were judged to be of average creativity? Would they never have gone on to create the works of genius that they did?

To the degree that creativity tests inform us about thinking outside the box – having a preparedness to be intellectually and artistically courageous – I can see the value.

Thinking outside the box – in fact, imagining many different boxes – is something that should be encouraged and fostered in the twenty-first century.

The nature of the challenges facing us requires it!

What About Artificial Intelligence? How is THAT Impacting Creativity Testing?

This boils down to two questions. One is the degree to which AI can be creative. The second is whether AI can play any role in the testing of creativity in humans.

As you might expect, the military and intelligence services are at the forefront of looking at how artificial intelligence can be leveraged. For example, people are looking at intuitive algorithms and using things like automatic poem generators to creatively mount cyberattacks.

Traditionally, this area has involved complex maths and logic, combined with creativity and ingenuity.

Facebook has demonstrated two AI chatbots, Alice and Bob, communicating with themselves in their own shorthand language. Chatbots are increasingly being used by companies both on their platforms and off to help with customer calls.

One area of AI research involves developing chatbots that can be taught to make more creative answers to the creativity tests out there.

Given the amount of data that we share about ourselves online, it is very likely that assessment systems will emerge that leverage this data to map creativity hotspots in the future.

We may find, for example, that certain cities have a higher percentage of engaged, creative individuals than others.

Connections might emerge between educational systems and creative activity. In time, this might help us develop better educational curricula.

However, I think that all of us have significant creative potential. This potential can be developed alone and with the help of others over time.

The tragedy is that people are either told, in one way or another, that they are not creative; or, for one reason or another, they come to believe this to be true.

Whether we all have the potential to be equally creative is a trickier question to answer!

Paul Jenkins is an internationally-known documentary film director, writer, and narrator. Paul founded Brilliantio to help people with their creativity, storytelling, and writing. His online course 'The Story Course' is a worldwide bestseller.